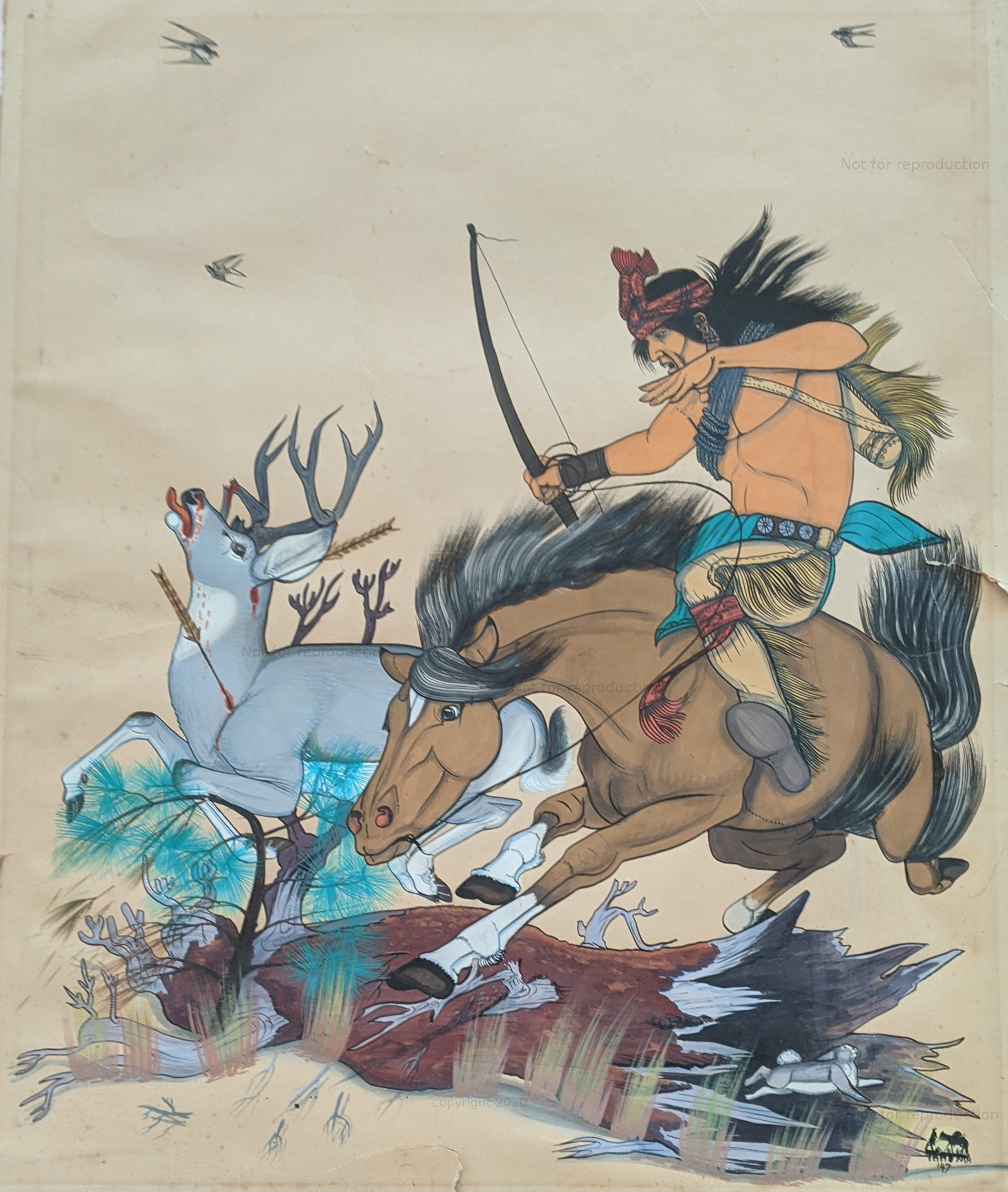 Quincy Tahoma painted Over the Hollow Log in 1947. This painting shows an artist at the peak of his skills. Everything about this image is characteristic of the best Tahoma paintings. But why was he doing his best work in 1947?

In 1947 Tahoma was 30 years old. He was a famous artist in New Mexico, and he had achieved a measure of national success by winning a prize from the Philbrook Museum in 1946. But he was facing the first great challenge of his life as a consequence of his growing dependence on alcohol.

Here’s how Charnell Havens and Vera Marie Badertscher summarized the incident that landed Tahoma in prison in 1947 in Quincy Tahoma: The Life and Legacy of a Navajo Artist.

On New Year’s Eve 1946, he had many successes to celebrate. He liked to socialize and his celebrations often involved too much drinking. He would sober up – sometimes in jail – and then get back to life. This time, however, the party got out of control…

On New Year’s Day, a Wednesday, Mrs. Hobbs complained to the police that her daughter was missing. When the sheriff, aided by the state patrol, located the girl in Albequerque on that same day, she “told her story” according to the Santa Fe newspaper. She said a Navajo artist named Quincy Tahoma had offered her whiskey and raped her. The police quickly located Tahoma and held him in the Santa Fe jail until court convened on Friday, January 3…

Quincy Tahoma stood alone in the courtroom, probably not feeling well after the New Year’s Eve celebration, and someone in the court or the District Attorney’s office advised that he could plead guilty to a lesser plea. No defense attorney appears in the court paperwork so it is doubtful that anyone explained his options to him. No one suggested that if he thought the charges were unfair, he could plead not guilty. No transcript of witnesses appears, and the trial did not take long.

Tahoma was accused of raping a 16 year old girl named Vonnie Hobbs who had been out with him on New Year’s Eve. He pled guilty and received a sentence of two to five years. His signature appears on none of the documents related to the case.

But prison was not so bad for Tahoma. In fact, if we judge that period of his life based on his artwork, it was the best period of his life. Tahoma was a famous prisoner, and he was well known to the warden and the guards. The guards purchased supplies for him, and he was able to paint every day. Since painting was all he cared about, he was not much bothered by being in prison.

He gave some paintings to the warden and the guards for additional privileges. Other paintings were taken out of prison and sold by various friends. Over the Hollow Log is almost certainly a painting that Tahoma produced while in prison.

Tahoma’s work outside prison was becoming quite inconsistent. His drinking was lending some paintings an unfinished or sketchy quality. None of his prison work reflects this drop in quality.

The painting is one of Tahoma’s best because it reflects his mastery of single page storytelling. It depicts a Native American man wearing a concho belt shooting a second arrow into a buck, while his horse and the buck leap a rotting log. The deer breathes its last breath while a scared rabbit runs out of the log. In the cartouche we can see that the hunter has managed to bring down the deer, as he has tied his kill to the back of his mount. 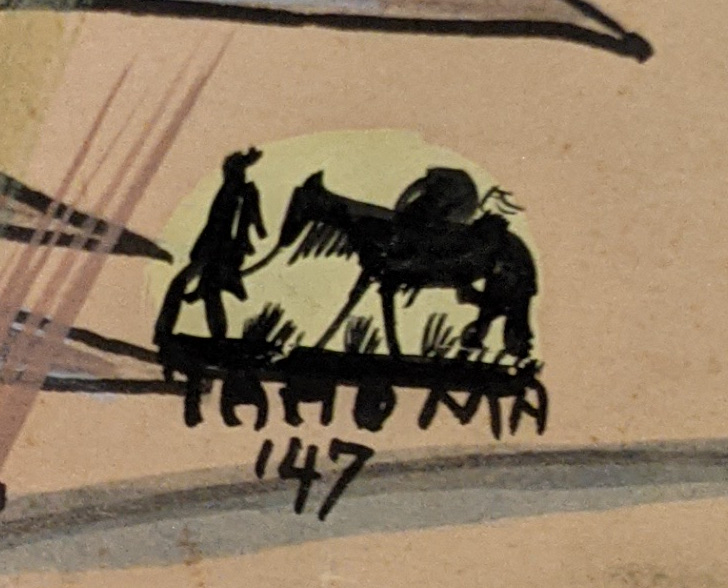 So much of this image is Quincy Tahoma flexing the techniques he had mastered by 1947. The background is plain, unpainted paper, but the scene is framed by three birds in the sky. The composition and drama of the scene reflects elements that were palatable to him, and were easy to sell to tourists. The horse and deer are painted using a mixture of painting and inking techniques that are still so evocative today. The image almost looks like an illustration from a comic book or pulp novel. The small animal running away appears in so many Tahoma paintings. One of his most oft repeated subjects was a horse being scared by a skunk or other small animal. The dress of the hunter is also typical of Tahoma, with the characteristic flourescent blue-green loin cloth that appears in almost every Tahoma depiction of Native Americans in traditional dress.

Tahoma lived many lives. After the war he had an increasingly difficult time keeping his lives separate. In 1947 his double lives continued. He was simultaneously a prisoner whose basic freedoms had been taken away, and a successful artist creating the best work of his life.

Painted during his time in prison, Over the Hollow Log is one of the best pieces created by Quincy Tahoma.