Swarm Intelligence in Music in The Signal Culture Cookbook 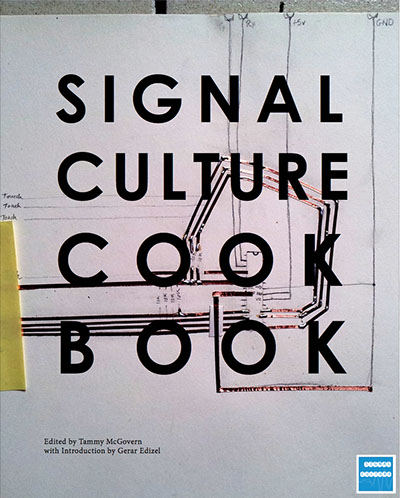 The Signal Culture Cookbook is a collection of techniques and creative practices employed by artists working in the field of media arts. Articles include real-time glitch video processing, direct laser animation on film, transforming your drawing into a fake computer, wi-fi mapping, alternative uses for piezo mics, visualizing earthquakes in real time and using swarm algorithms to compose new musical structures. There’s even a great, humorous article on how to use offline technology for enhancing your online sentience – and more!

And here’s a quote from the introduction to my chapter.

Some composers have explored the music that arises from mathematical functions, such as fractals. Composers such as myself have tried to use computers not just to imitate the human creative process, but also to simulate the possibility of inhuman creativity. This has involved employing models of intelligence and computation that aren’t based on cognition, such as cellular automata, genetic algorithms and the topic of this article, swarm intelligence. The most difficult problem with using any of these systems in music is that they aren’t inherently musical. In general, they are inherently unrelated to music. To write music using data from an arbitrary process, the composer must find a way of translating the non-musical data into musical data. The problem of mapping a process from one domain to work in an entirely unrelated domain is called the mapping problem. In this article, the problem is mapping from a virtual swarm to music, however, the problem applies in similar ways to algorithmic art in general. Some algorithms may be easily translated into one type of art or music, while other algorithms may require complex math for even basic art to emerge.

Donate to the Signal Culture Group to get the full book!